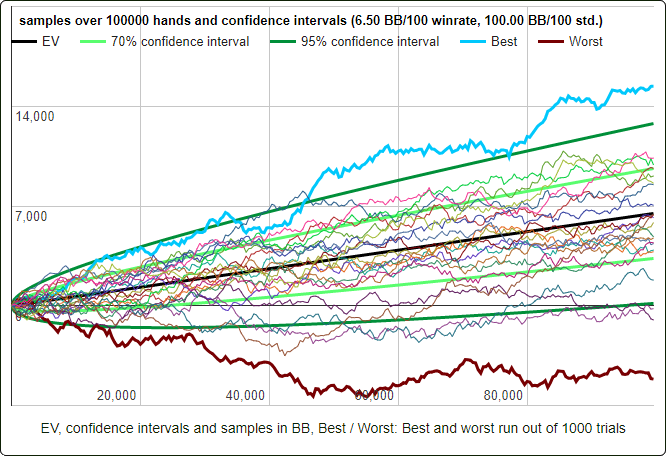 Variance graph for Player A calculated on www.primedope.com

Why you should use a HUD, if you don’t like downswings

If you play online poker, then you absolutely have to use a HUD. It’s just humanly impossible to keep track of all of your opponents tendencies, and then adjust and exploit them accordingly. You might be a very “GTO” player and you just play your game, which is fundamentally very sound, and you are winning. If this is you, then imagine, how much further you could increase your winrate, with your skills, if you could add more exploitative lines to your game.
Higher winrate is also better for your mindset and your overall (let’s call it) happiness. Although higher winrate doesn’t actually lower the variance, like many people like to think – you will still win 60% of 60/40 situations and the odds to hit your hand are still the same regardless of your winrate.

The real difference comes from the fact that those stretches that used to be the “downswings” might now be just break-even stretches, and the used-to-be break-even stretches are now stretches with just a lower winrate than your average. This is because your graph is now moving up on a higher degree angle.

Let’s look at an imaginary situation, where poker gods come together and reach a conclusion that player A and B should have a 100k hand stretch, where they will have 5bb/100 lower winrate than usual. Now, player A‘s normal winrate is 6.5bb/100 – the +EV HUD user, and player B‘s winrate is only 1.6bb/100. Clearly the “downswing” is going to be a lot tougher for player B, because they are losing at a -3.4bb/100 for 100k hands, while player A‘s winrate went down to 1.5bb/100 for those 100k hands. Player B is also a lot more likely to go on tilt and increase the length and depth of their downswing even further. 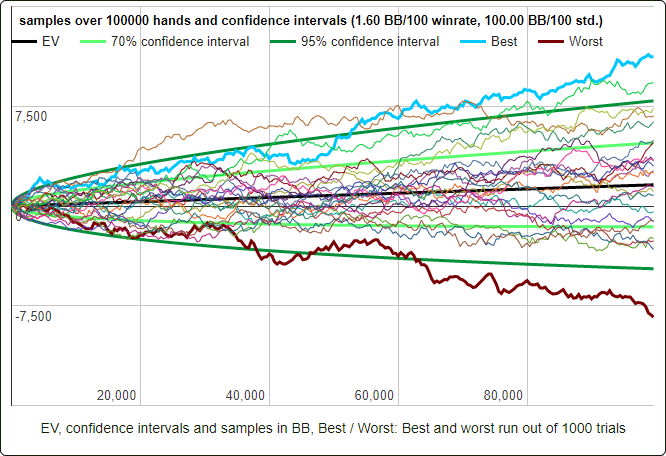 Variance graph for Player B calculated on www.primedope.com 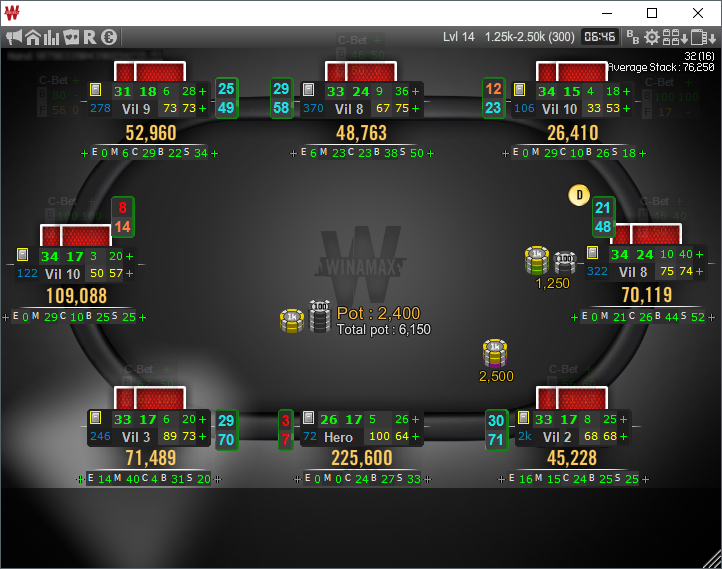 HUD on a Winamax MTT table

Player A on the other hand, can’t even call it a downswing, even though they are winning at a lower winrate than usual. But because of the higher initial winrate, the same “bad beats” don’t have as dramatic effect on them.
They both lost 5bb/100 from their winrate, but the real line that matters, is the 0 line, from which player A didn’t fall through, but player B did.
So this means, that if you have a higher winrate, you will also have less downswings and they will be smaller. The variance is still there, because variance does not equal downswing. But because your winrate has a bigger buffer, in case a negative variance happens, you won’t experience as many and as dramatic “downswings” as would a player with a lower winrate.

All the small edges you can gain from a HUD, which you wouldn’t notice without it, can make a very big difference in your winrate and in your mental state at the tables. So make yourself a favour and get a free +EV HUD trial and improve your winrate.

Although the above example is based on cash games, it is the same for tournaments, just instead of bb/100, think of ROI.